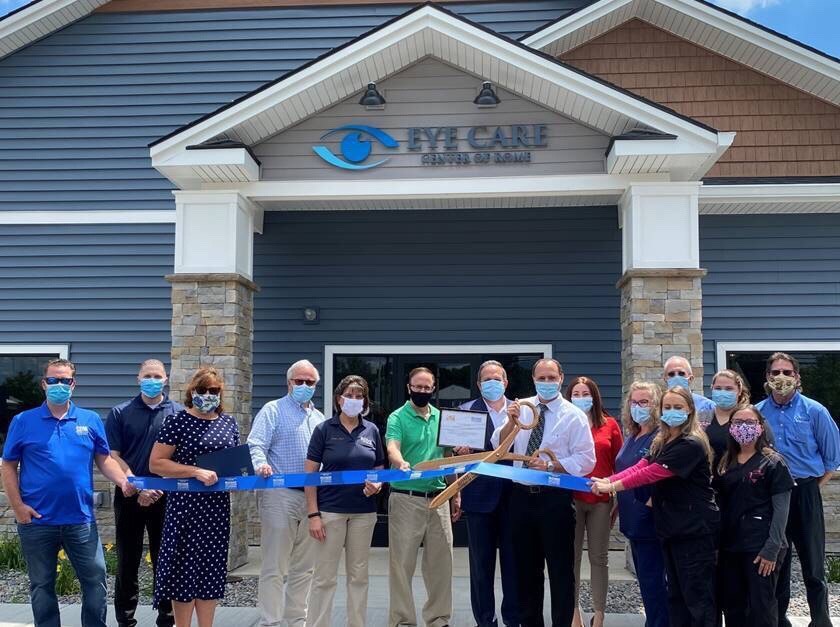 At a Friday afternoon ribbon cutting, Dr. David Vinci said he, Dr. Lauren Pierson and Dr. Nichole Pollard had been busy welcoming new and returning patients to the newly built 1320 Floyd Ave. location of the Eye Care Center of Rome.

The practice relocated from a smaller office at 1300 Floyd Ave., which Vinci purchased from Dr. Jerry Baker in 2011.

“We have lots of space now,” Vinci said. “The construction team did great.”

Construction on the 6,000-square-foot new 1320 Floyd Ave. build began in mid-October. The one-acre parcel of land hosting the project was purchased from the Griffiss Local Development Corporation in 2018.

Vinci said the practice was able to open its doors in early June, and the
project was completed on time
even while the world navigates the
coronavirus pandemic and any associated business impacts.

He added that while planning the opening, some reconfigurations had to be put into place.

“We were able to space out the waiting room and add plexiglass screening at the reception desk,” he said.

“The reception desk was crafted locally by Niemetz Cabinet and Millwork in Whitesboro,” said Christopher Pisanti of Brewerton-based firm Construction, Design and Management, which spearheaded the project.

“It was on time and on budget despite COVID,” he said, noting that even on the construction site, workers were socially distanced and work shifts were staggered to limit the number of people on site.